Wanipee is a fairy with the form of a blue crocodile. Wanipee has dark blue skin, a pale blue belly and lower jaw, big pointed teeth, and big rounded golden eyes . His tongue always sticks out of the side of his mouth. He has a rather stout body type, with large, black spikes along his tail.

Wanipee is pessimistic and a bit of a crybaby. Despite his appearance he is quite weak and can't hold up in a fight. This is seen in Episode 2, where Wanipee and Moffle get in quite a stir when Wanipee does not listen to Moffle's nice comments. However, the main reason for this attitude is that he is afraid of vanishing should he lose access to animus.

Wanipee is one of many mascots in Amagi Brilliant Park.

They are coworkers. Moffle attempts to comfort and encourage Wanipee when he was crying, however it's suggested that Wanipee holds anger and jealous towards Moffle and his popularity despite that. When Wanipee insults Moffle, Moffle gets violent with him and Wanipee immediately withdraws showing that Wanipee is the submissive one in their relationship. 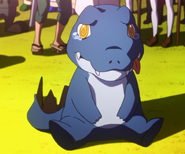 Moffle starts to get violent because Wanipee dismissed his encouragement and showed jealously towards Moffles high popularity since he is the main mascot.

Wanipee telling everyone that he has low popularity.