Jessica Calvello
Tiramy (ティラミー, Tiramī?) is the fairy of flowers with the form of a pink Pomeranian, and one of the Amagi Brilliant Park's mascots.

Tiramy has light pink fur and long white fur around his neck. He has oval blue colored eyes and pointed, small ears. He wears a red flower-shaped hair clip on his right ear and a circular yellow satchel bag that is worn over his body.

When performing for the children, Tiramy may wear a black magician's hat with a matching cane in order to make flowers appear magically.

While working at the park, Tiramy will usually behave in a professional and appropriate manner in front of the visiting children and adults to maintain his reputation of being a friendly mascot.

However, the real Tiramy outside of work is revealed to have an extremely mischievous side as he revealed that he once accidentally destroyed parts of his old high school in a science experiment and showed no signs of remorse for the act, which earned him a scolding by Isuzu.

He also has an extremely perverted personality as he likes peeping on or flirting with women (at the park, bar or other places)and will find any opportunity to fulfil his desires, despite being frequently being reprimanded. In fact, his lust for women is so strong that he was willing to betray the park's cast members and joined Tetsuhige's crew after he said that "He could do anything he liked to the captured women". To that end, Tiramy pushed his own friends into a pool of slimy creatures without any hesitation or remorse but was scared when this was directed back to him for his betrayal by Isuzu, Moffle and Macaron.

Similar to Moffle and Macaron, Tiramy has his own sentence suffix. He often adds "mii" to the end of his sentences.

The fairy of flowers that lives in “Tiramy's Flower Adventure”. Despite the cute looks, he always has a keen eye for young ladies and bewitching older women.

Tiramy and Macaron get along well with each other and are usually seen with one another and both share the job of being one of Amagi Brilliant Park's mascots. Tiramy, Macaron, Moffle, and sometimes Isuzu are often seen drinking together in a pub.

Despite being close friends, this did not stop Tiramy from briefly betraying the park and kicking Macaron into a pool filled with slimy creatures after pretending to side with him. In revenge, Macaron and Moffle intended to carry this punishment on Tiramy but all three fell in the pool.

Moffle and Tiramy are co-workers that generally get along with each other and talking casually. However, they do occasionally have fights; examples include when Moffle warned him not to flirt with the female pub worker, as it would be bad for the park's already poor reputation. Another time they fought was when both Tiramy and Macaron claimed that the reason Moffle cared about Latifa so much was because Moffle had a sister complex. In both these fights, they were able to get over it quickly, (though they needed a mediator in both fights).

Also, they are shown to have similarities as while Moffle will usually scold Tiramy for his perverted tendencies he has proven to be no better in his own tastes for women.

Despite being close friends, this did not stop Tiramy from briefly betraying the park and forcing Moffle to fall into a pool filled with slimy creatures after pretending to side with him. In revenge for this act, Moffle and Macaron intended to carry out this punishment on Tiramy but all three fell in the pool.

Tiramy and Sento are co-workers at the park. Tiramy has stated on multiple occasions that he finds her very attractive, due to her well-endowed body. He has stated many times he wants to see her undressed but is always intimidated or beaten by Isuzu after she shows little to no patience for him, due to his perverted behavior.

Out of the three main mascots, Isuzu is the most physically violent towards Tiramy because she just despises his mannerisms to women. When Tiramy briefly betrayed the park to join Tetsuhige's crew (mostly for the women), he was intimidated by Isuzu after being forced to have her walk into a pool filled with slimy creatures and nearly backed to it himself. After Tetsuhige was detained, Sento did not hesitate to punish Tiramy for his actions, to the latter's fear. She was ordered by Latifa Fleuranza not to go too far, so she just had Moffle and Macaron walk him into a pool filled with slimy creatures but all three fell in. 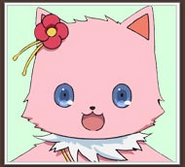 Tiramy about to go off

Tiramy and his buddy Macaron being shocked