Awful Service by the Mascots ②

Jay Hickman
Takaya Kurisu (栗栖 隆也, Kurisu Takaya?) is one of the workers for Amagi Development. With the way he is revealed towards the end, he can be considered the main antagonist of the story.

Kurisu has slicked back light blonde hair that has one bang hanging on the left side of his face and violet eyes.

Kurisu has the appearance of your typical hot office worker, and is seen wearing a gray suit, a white shirt with a blue tie and glasses. His glasses can split apart into two from the middle.

Kurisu appears to be hardworking and dedicated to his career. He is a rather mean-spirited and a rude person, and can be interpreted to have a sadistic side for he approached Seiya Kanie and spoke of his background despite the fact that Seiya was visibly uncomfortable about the subject.

In the past, Kurisu was revealed to be the wizard who saved Latifa Fleuranza and he was promised her hand in marriage. However, the King (Latifa's father) refused to keep his end of the bargain and tried to have him executed, despite him doing as commanded. In revenge, he casted a curse on Latifa many years ago and was thought to have been killed but he really went into hiding, laying low as his plans took effect in causing Latifa to continuously de-age.

He soon arrived in the real world and took on the alias Takaya Kurisu where he started working for Amagi Development and was intent on shutting down Amagi Brilliant Park (location) to gain complete vengeance.

Episode 2: Kurisu is first seen in conference room talking about Amagi Brilliant Park's current condition. He inquires about Seiya's identity and affiliation with Amagi Brilliant Park and doesn't appear to be satisfied with the answer. He later tells Seiya that if he hangs around with 'losers' he too will be a loser.

Episode 12: He visits the park once more and tell Seiya that he continue his efforts but it won't do him any good as the park will still shut down. He tells Seiya he will have one of his men visit the park on the day its suppose to be closed down.

Takaya soon revealed his true color by revealing he is aware of Seiya's powers and the prophecy before he turns into smoke. Isuzu Sento soon arrives shooting at Takaya who disappears before Moffle can charge at him. Isuzu reveals to Seiya that Takaya was the same wizard who cursed Latifa as Moffle is angry that his enemy was in front of him this whole time and swears revenge.

Takaya knows about Seiya's past in entertainment which suggests that he was a fan of him in the past. Also, he was impressed by Seiya's mathematical ability and attempted to recruit him into Amagi Development. However, Seiya dislikes Takaya and it appears that they will never get along. 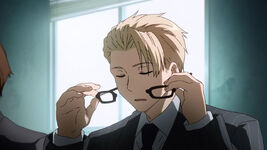 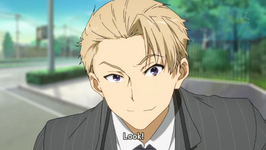 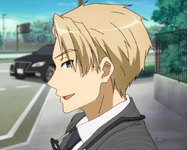 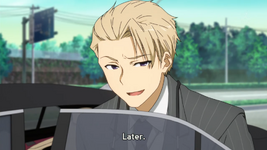 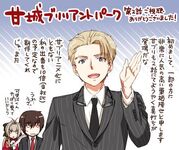 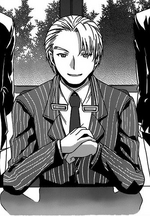 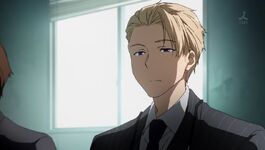 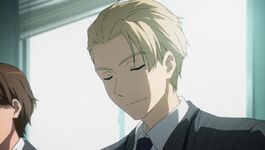