Chapter 3: The Service Given by the Mascots is Awful.

Cara Duncan
Takami Seno (タカミ, Seno Takami?) is a waitress at a restaurant "Savage" who is frequented by Moffle, Macaron and Tiramy.

Takami has the appearance of a generic young girl with brown eyes and brown hair. Tiramy finds her to be very attractive. She has thick brown eyebrows and wears a baggy black sweatshirt.

Her uniform requires her to wear a long blue apron with the restaurant's logo on it.

Takami is a sweet, soft-spoken girl who works hard to serve her customers and maintain peace within the restaurant.

She is a very tolerant person, as she could put with the lewd comments from Tiramy in good fun. However, she will tell him to stop at times.

Takami is a fourth-year college student. She works part-time as a waitress for the resturant "Savage". After she finishes her fourth year, she plans on working in Public Service at the Amagi City government office.

Takami is close with her little brother, enough to talk to him about her decision to become a Public Service Officer. She's concerned about his decision to stop going to school, but doesn't worry too much because she acted the same way when she was his age.

She's rather close to Moffle, enough to invite him to drink at Savage even after closing time. She also confides in him with her worries about the restaurant and her family, and trust him to carry her home after she gets drunk. It is hinted that she has a crush on Moffle.

She has a friendly relationship with Macaron, who is a regular at her bar. Macaron respects her and is genuinely sorry when he causes trouble at Savage. He also yells at Tiramy when he tries to flirt with her.

She has a friendly relationship with Macaron, who is a regular at her bar. Tiramy treats her like he does most girls, constantly sexually harassing and flirting with her. However, Takami has a good handle on his personality, calmly shooting him down each time. 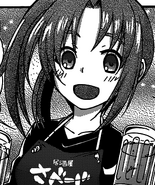