Rubrum the Red Dragon (赤龍ルブルム Sekiryū Ruburumu) or 'Ruby', is a big and red dragon who lives at an abandoned attraction in the southernmost side of Amagi Brilliant Park, but later he was re-hired to work on another attraction.

Ruby is a large red dragon with horns protruding from every corner of his head, yellow eyes with slit-like puplis, clawed wings, and his belly and wings are much brighter color.

At first, the dragon appears to be exuberant, proud, and strong when Seiya, Moffle, and Tiramy ran into him. His large stature and booming voice backed up his charade. However, once Moffle punched him, the Ruby broke down and asked for them to stop as he was only putting on an act for his attraction.

He is actually the complete opposite to the fierce demeanor he puts on while doing his act. He is timid and friendly as he acts cowardly when in serious situations, such as in episode 9, where he is anxious to participate in Moffle's plan to fly over the castle's security systems. Ruby is also polite and knowledgeable with his peers as he talks with etiquette and in a gentle voice.

Ruby makes his first appearance in episode 5 and Volume 2 of the light novel, where Kanie, Sento and the 3 usual mascots, go exploring "Dornell's Cave" hoping to find treasure to help fund the park. His first appearance is intimidating and he successfully scares Kanie, Moffle and Tiramie. Kanie challenges Ruby to test of knowledge where Ruby will ask any question. Kanie succeeds and answers correctly by reading Ruby's mind as he asks the question. Ruby, feeling cheated starts to complain and his demeanour changes quickly, Moffle notices it and punches him. Ruby surrenders and says he got excited that he finally had visitors in his attraction and hadn't had one in years. Later, the Ruby and the Diggery clan agree to work for Amagi Brilliant Park.

Ruby is makes appearances from time to time throughout the anime and light novel. He is seen again in episode 9, where the park is trying to turn off the castle's security system. Moffle and him team up and try to fly over the castle, however it ends in failure.

He is present for when the park is setting up the soccer match and for the final visitors needed to reach the park's quota.

His last appearance in the anime is in episode 13, where Tricen is tasked to make a promotional video "PV" for the park and Kanie advised Tricen to go around talking to some staff members for advice, which lead Tricen to Ruby. Ruby suggested adding his video of when he was in his agriculture class.

In Volume 4 of the light novel, Ruby makes a return and plays a more important role to the story. Kanie and the gang are trying to figure out why bad things keep happening when Bandou Biino is around. Tiramie and Kanie suggest it could be an evil spirit. Tiramie then calls in Ruby for questioning about evil spirits. Ruby looks at Bandou Biino and mentions how she has a powerful curse on her, he knows this as he is a dragon and they have the power/affinity to see such curses.

Ruby is a dragon, which allows for him to to breathe fire, fly and have thick durable skin. How powerful he is unknown but since he is timid and scared easily, he must not be powerful.

Also due to being a dragon, Ruby has the power to see curses and blessings on beings.

He appears to not have made friends with anyone in the park [according to the anime], but he does work there. 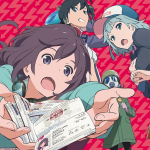 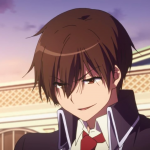