Okuro (オークロ Ōkuro) works at the Chief of Security at Amagi Brilliant Park. Since he is stationed at the entrance of the amusement park, he keeps track of the total number of visitors each day.

Okuro is a tall muscular hot man who wears a red lucha mask.

He seems to get along well with the other employees and is seen standing with them as they cheer for Isuzu. 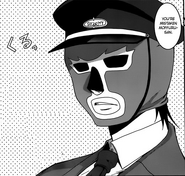 Okuro working at the booth.

Okuro wrestling with a professional wrestler. He is holding his ground very well.
Community content is available under CC-BY-SA unless otherwise noted.
Advertisement