Nick (ニック, Nikku?) is the Head of Catering at Amagi Brilliant Park.

Nick's appearance is composed mostly of meat, with chef clothing. His head looks like a large ham with a bone through it and a chef's hat on top. As for his facial features he has very few conventional features in the sense of a nose or ears, however he has tiny freckles and a low brow. Often his brows are pulled down, which is shown by a thin line in a downwards curve. Nick's arms are sausages and he has no fingers. As mentioned before, he wears chef's clothing: a white chef outfit and hat with a dark blue apron.

Nick is a complex and interesting person. In front of his friends such as Mirai he acts confident and fun-loving with a lazy side however when he isn't with his friends he acts differently. He is clearly dedicated to his job- though this is contradicted in episode 3 when he was opposed to working on Fridays. Although this could be the fact that he is so hardworking, he recognizes that he needs a break in return for his hard efforts. 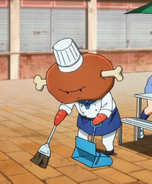