Emily Neves
Muse (ミュース, Myūsu?) is a fairy of water and the leader of the fairies of Elementario at Amagi Brilliant Park.

The Muses are from Greek Mythology and were known as entertainers for the Olympian gods for their singing, dancing and other talents. Some Muses were nymphs, which were creatures/entities associated with water and lakes. Nymphs are the Greek version of the fairytale creature, Undines, which are known to represent the element of water. The word "Music" is derived from Muses.

A teenage girl of average height, Muse has short silver-white hair and emerald green eyes. As mentioned by Tiramy and Triken, Muse is considered to be very attractive.

Muse wears a blue shirt containing inner white frills along with a short skirt. Packed with blue wristband and necklace. With her flat navy shoes, that help complete her outfit.

Muse is very energetic, cheerful and optimistic as she is often seen with a smile on her face. Despite the lack of popularity of theElementario, she still works hard and shows enthusiasm. She is shown to be sensible, as she tried her best to be responsible and mature when being called by Latifa to eat. She cares deeply for other's feelings and etiquette as she is quick to tell Salama off when she points out things can be seen as rude or mean.

She is the Elementario fairy of water. At the beginning of the Light Novel, she is apart of Amagi Brilliant Park's Aquario dance squad which later disbands and forms Elementario when the other fairies get introduced.

Fellow workmate of Elementario and friend. Muse usually helps out Sylphy whenever she needs to fix her appearance or etiquette.

Fellow workmate of Elementario and friend. Kobory is as polite as Muse and doesn't get told off by her.

Fellow workmate of Elementario and friend. At first, they seem to have a little complicated relationship, even if they're working in the same group. However, shown in episode 9, their bond grew stronger, as they helped each other with the trials. 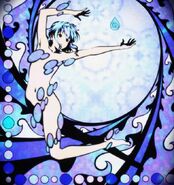 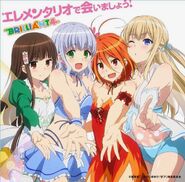 A shot of muse in a swimsuit.

Muse in the manga 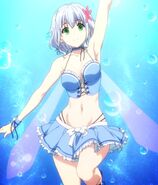 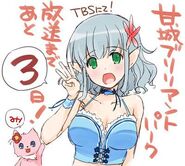 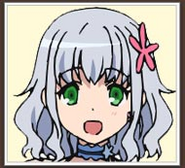