Tiffany Grant
Moffle (モッフル, Moffuru?), fully Moffle Mel Mosenus (モッフル・メル・モーセナス, Moffuru Meru Mōsenasu?)[citation needed] is the most famous mascot of Amagi Brilliant Park as its fairy of sweets, and the Cast Leader of Sorceror's Hill. He is also the maternal uncle of Latifa Fleuranza.

Mochi-Waffle, a Japanese dessert that is mochi-cake shaped into the form of a waffle. "Fumoffu" is a phrase said by the character, Bonta-Kun from Full Metal Panic! Fumoffu!

Moffle has the form of a brown mouse with a green hat and a red ribbon. He has big light brown eyes.

Moffle is hot-headed, pugnacious, and hates being called a rip-off more than anything. He usually adds "fumo" to the end of his sentences.

Moffle is very attached to his family, as he cares greatly for his niece as he was entrusted to care for her by her mother, his older sister. Moffle is rumored to have a major sister complex which he defends on a regular basis before he is forced to attack people for suggesting otherwise.

Moffle is the uncle of Princess Latifa, being the younger brother to her mother and is very caring of his niece due to her curse. For his relationship, Moffle was made a high-anking officer within the army of Maple Land.

The Queen of Maple Land is Moffle's older sister and Latifa's mother. He loved his sister very much and it is implied by his friends (Tiramy and Macaron) who often poke fun at him that he has a sister complex, something that angers him way more than what a normal person would be. This was hinted at when Moffle talks on about true love to high school girls, the person he loves the most had married someone he hated the most, and 10 years later, asked him to take care of their daughter. Sento Isuzu inquires him whether he was talking about Latifa's mother as he angrily states it was hypothetical. Seeing that Moffle is Latifa's uncle from the mother side, and that her mother (and his sister) asked him to take care of Latifa, the only conclusion is that the person he is referring to in his personal issue is his sister marrying the King, and asking him (now an uncle) to take care of Latifa, which effectively proves that he is indeed a siscon though he again denies it.

Latifa is the daughter of Moffle's older sister, making her his niece. Moffle cares for Latifa a lot and it seems like he has a strong bond with her mother. Moffle will stop at nothing to protect Latifa, no matter what.

Their mutual dislike between them begun in episode 1, in their first encounter with each other. Moffle first gave Seiya an unpleasant look which led to Seiya giving him the same look in return. From then on, they grew to greatly dislike to each other and are constantly coming to blows with one another which is usually broken up by Sento who shoots them both before it escalates. Though, they seem to get along when it comes to a serious business regarding the park's crisis. Moffle even called Seiya by his first name one time when he saved the park as well as Latifa and helped him up after he collapses to his knees out of joy. Moffle was later surprised and moved to see Seiya genuinely thank the park workers for sticking by his side as they struggle to rebuild the park.

He was also happy to hear Seiya had business arrangements that will make sure the park doesn't have to worry about money problems ever again and later happy to see him stay as manager.

Isuzu seems to respect Moffle, and she calls him 'Lord Moffle' or 'General', and Moffle trusts and respects Isuzu too. However, she will shoot him with her gun should his temper gets out of hand. Isuzu knows that Moffle believes a sister complex but doesn't make fun of him as she knows he just loves his sister.

Moffle and Tiramy are friends as well as co-workers that generally get along with each other and talking casually. However, they do occasionally have fights; examples include when Moffle warned him not to flirt with the female pub worker, as it would be bad for the park's already poor reputation. Another time they fought was when both Tiramy and Macaron claimed that the reason Moffle cared about Latifa so much was because Moffle had a sister complex. In both these fights, they were able to get over it quickly, (though they needed a mediator in both fights). Also, they are shown to have similarities as while Moffle often disapproves of Tiramy for his perverted tendencies he has proven to be no better in his own tastes for women.

They are coworkers. Moffle attempts to comfort and encourage Wanipee when he was crying, however it's suggested that Wanipee holds anger and jealously towards Moffle and his popularity despite that. When Wanipee insults Moffle by claiming he could easily get a new job at Dejima Land because he is a mouse mascot and best buddies with Mackey Mouse, Moffle gets violent with him and Wanipee immediately withdraws showing that Wanipee is the submissive one in their relationship.

Initially, Moffle disliked Takaya for his repeated attempts to shut down the park. However, he gained an incredible hatred for the man after it was revealed that he was the same wizard who cursed his niece years ago. Moffle tried to attack him but Takaya got away as Moffle angrily swore retribution on the man and was angry that all this time, his greatest enemy was right in front of him all along.

Light Novels, Moffle and Mackey Mouse were brief comrades in a militaty operation, Moffle representing the Maple Land Special Forces and Mackey Mouse being a pilot for the United States of Dejima Air Force. The operation was that communist revolutionists within Maple Land were causing multiple acts of terrorism and took a number of people hostage, both being people of Maple Land and Dejima. The operation was successful and the hostages were retrieved, Moffle's team doing the most work, however they couldn't be credited too much since it was Maple Land terrorists that caused this, so most of the rewards and credit had gone to Mackey Mouse, who contributed hardly anything to the operation. Mackey Mouse was able to gain a nice rank, land and lots of money which lead to him to build the extremely successful Dejima Land. Moffle greatly dislikes Mackey because he is patronising, egotistical and pretends to act like the two of them are great buddies. Mackey Mouse often visits Amaburi to see how poor it is doing compared to his successful Dejimaland and to patronise Moffle. 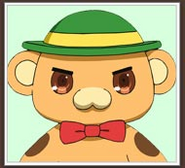 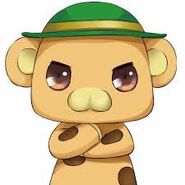 Moffle appearing to take off his "shoes" 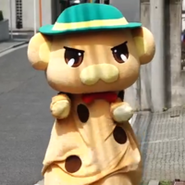