Allison Keith
Macaron (マカロン, Makaron?) is the fairy of music in the form of a ram, and one of Amagi Brilliant Park's mascots.

Macaron or Macaroon, a French dessert that is a sweet meringue confection.

Macaron has fluffy white fur, round golden horns on the sides of his head, and a thin pink ribbon tied around his neck.

While working, Macaron is professional and appropriate in front of the children. While not as childish as Tiramy, he does like pranks and does have perverted tendencies. Macaron has a short temper and is easily agitated. He often adds ron to the end of his sentences.

Macaron is the fairy of music that lives in “Macaron's Music Theater”. He has an artistic air and often takes time off of work when he's not feeling inspired. Due to this, Isuzu described him as a "true artist".

He has a daughter, Rarapa, who's in custody of his ex-wife. In chapter 6 of the manga, it was revealed that he had to see a lawyer because he was being harassed for child support. Not only that, his ex-wife was taking him to court because he had failed to pay it many times in the past.

Episode 2: Macaron is seen with Tiramy being harassed by children. They later fight because they needed to release their fustration from the beginning.

She is Macaron's daughter who he loves very much. While she has not appeared, Macaron is trying to gain full custody of her from his ex-wife, which is another show of his affection for his daughter.

Moffle is the leader of the three main main mascots. Moffle and Macaron are good friends.

He works along side with Tiramy. They are very good friends and they confide in each other in many things from pranks, to their personal problems. Although they're close, Macaron, like every other member of the park, does get irritated by Tiramy's overly perverted tendencies. 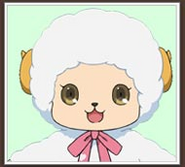 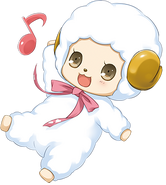 Macaron and Tiramy just before they die