Robin Nennig
Kanae Tsuchida (土田 香苗 Tsuchida Kanae) is a girl that accidentally put a love-letter in Seiya Kanie's locker, which actually was meant for Kimura.

Kanae has straight purple-grey hair, that is tied in twin-tails by two pink hairbands featured with white accessories and gold-olive eyes.

She is often seen wearing her school uniform.

Kanae seems like shy and generous type, but she is also afraid at getting yelled at. She also is easy to win over, Tiramy mentioned.

But, she also has a yandere type personality, example is when she was silently angry that Seiya Kanie (actually Tiramy) forgot her name or his associations with Isuzu Sento and Shiina Chūjō.

Kanae was in love with Kimura ever since her first high school year that she decided to confess her feelings to him.

Episode 8: Kanae wrote a love letter to Kimura to confess but it ended up in the locker of Seiya Kanie and "he" (actually Isuzu Sento) goes to the spot where she apologizes for the confusion. Her worries are soothed by "him" as it was an honest mistake and this kindness causes her to blush before she leaves. Afterwards, she talks to Kimura explaining that she isn't sure who she really likes, because Seiya was kind to her and Kimura tells her he would of readily accepted her confession.

She is soon put off by Seiya (actually Tiramy) after he forgot her name or she learns of his associations with Isuzu Sento and Shiina Chūjō.

While her friends try to confront "Seiya" (actually Moffle), she was confused by his quick and sincere apology though his long explanation of love shocks. As he was talking to the girls, "Kimura" (the real Seiya) appeared and made it seem like that he and "Seiya" set it up as a plan to set Kanae up with him and the explanation is accepted with Kanae choosing to talk to him.

He was the boy that Kanae meant to give the love letter to but it accidentally ended up being sent to Seiya Kanie and a misunderstanding results in her falling for him instead. Kimura talks to Kanae about this, upset about this because he liked her for a while before "Seiya" appears and he punches him but is creeped out by his antics and runs off in terror.

At the end, she falls for him again after "Kimura" (the real Seiya) appeared and made it seem like that he and "Seiya" set it up as a plan to set Kanae up with him and the explanation is accepted with Kanae choosing to talk to him. It is unknown if a relationship was born after Seiya spoke with Kimura. 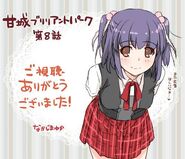