Genjūrō has the appearance of a blue dolphin wearing red samurai gear. As expected of an amusement park character, he has a goofy and cute appearance. He has small round eyebrows fitting with his round blue eyes that are a gradient of three different shades of blue. There are two white sparkles in his eyes and his snout is very rounded which both make him look young and cutesy. His belly is a lighter shade of blue.

Genjuurou is a polite and reserved mascot. He speaks in literature Japanese as per his definitive trait (Samurai)m referring to himself as "拙者" (Sessha) and ending his sentence with "でござる" (de gozaru) where applicable.

He is the Splash Ocean Cast Leader, which suggests that he does hold some seniority in the park.

Episode 3: He is sat in the board meeting. 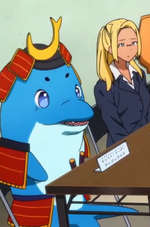