Mirai-Kun has the appearance of a vague globe, with arms and legs sticking out of the sides. He has large circular eyes and a small mouth and no other facial features, however the facial features he does have are spaced far apart. Mirai-kun has no ears, so how does he hear? His face is located roughly on the pacific ocean, and you can see Japan next to his right eye.

It's implied that he is lazy, for he is in favour of the park being shut down on fridays so that they can have "TGI Fridays". 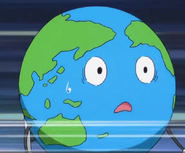 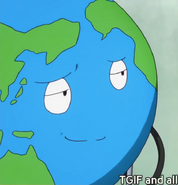 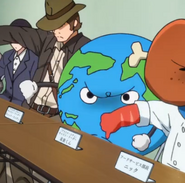