Nobuaki Maruki, Hiroyuki Takahashi
"Not Enough Time!" (時間がない！, Jikan ga Nai!?) is the second episode of the anime series Amagi Brilliant Park. It was broadcast in Japan on October 9, 2014.

The next day, Seiya realizes he has the power to read people's mind. Isuzu asks him to try reading her mind and once he does she reveals to him that he can only read someone's mind once. He gets irritated and believes that he was set up as Isuzu doesn't want him to read her mind. She replies with a blunt "maybe". Because of this, he gets annoyed and asks why he was given this power, which Isuzu responds to by saying "to force you to accept the manger's role". Right afterwards, she states that they are going to the park again and points Steinberger into Seiya's mouth, effectively stopping his "I refuse" speech.

Isuzu again takes him to the park, where they proceed to meet some people from Amagi Development, one called Takaya Kurisu. They are the ones who would take over the park if the park fails to reach 500,000 guests for 5 consecutive years. The contact specifies that they tally the park's annual visitor count on the first of each August. After the meeting, Takaya recognizes Seiya and tells him not to get close to the losers in the park, or he too will become one.

In the park, an assembly is held where the Princess, Latifa Fleuranza, announces that the park will be closed in three months. Seiya returns to them and announces that he will save them. But later, when he's alone with Isuzu and Latifa, he says that he just said so to raise everyone's spirit, that he's not actually confident about it - but Latifa says that she has complete faith in him. The episode comes to a close with Isuzu thanking Seiya. 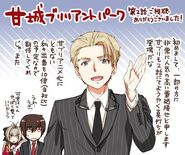