This article is a stub. You can help Amagi Brilliant Park Wiki by expanding it.

Elementario (エレメンタリオ, Erementario?), formerly known in the Light Novel as Aquario (アクアリオ, Akuario?), is one of the many attractions at Amagi Brilliant Park, located within the Sorcerer's Hill. The attraction consists of a stage performance by a group of four elemental fairies: Muse,Kobory, Salama and Sylphy.

The current four fairies, Muse, Kobory, Salama and Sylphy, have only been performing together for six months before Seiya Kanie's arrival. They had to suddenly form a team when their predecessors; the show's original fairy cast, all suddenly quit.

While the four fairies are able to manipulate the elements of water, fire, earth and wind to some degree, they are limited in using their abilities during their performances due to it being illegal to light a large flame indoors, the cost of excessive water consumption and the impracticality of digging a hole into the stage. 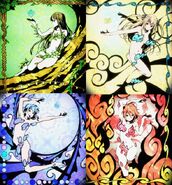