David Wald
Dornel (ドルネル Doruneru) is a fairy of flowers who appears in the form of a ferret. He was trapped in the "Ruby's Trial by Fire" attraction while looking for a treasure. Instead of looking for a way out, or calling for help he simply chose to stay there so he could watching anime and playing online games. He was locked down there for ten years.

He looks to be based on a ferret. His fur is orange along with the face being a pale yellow shade. His eyes appear to be naturally closed half of the time and has a wide :3 mouth. He has a hot pink flower with thin petals and a leaf on his right ear. He wears a bold purple vest with yellow accents and rounded ends which match with the flower accessory.

He is a big pervert who loves anime and is addicted to MMO.

Lived away from the public eye by staying in a cave for 10 years to look for treasure. Since no one found him, he was presumed dead. He used his new found free time to build plastic models, watch anime, and play games over an internet connection he got hooked up. He didn't to call for help because soon after he set up his room he got addicted to an MMO (Massively Multiplayer Online game). He would stay logged in for 20 hours a day (what a nerd) and built up a fan base by pretending to be a girl. He survived by ordering food and tea through phone to one of the Digerries. 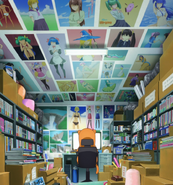 Dornell crying when Kanie sold all of his stuff
Community content is available under CC-BY-SA unless otherwise noted.
Advertisement