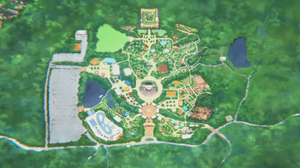 Amagi Brilliant Park (Amaburi) is a theme park in Japan, built around the conceptual theme of a magical fairy land known as Maple Land.

While originally a successful theme park, poor management has recently driven the park to near shutdown due to its run down attractions and low amount of customers.

While on the surface it is merely a theme park intended for the amusement of its patrons, in reality Amagi Brilliant Park is an Argel facility built to harvest "fun energy" that keeps the magical inhabitants of Maple Land alive. In addition, many of the park's staff are actual fairies known as "Maplelanders" who live in the human world due to various reasons and use the park as their source of income and means to survive.

The park was originally created as a refuge for Princess Latifa to reside within while under the curse. It was intended that the steady supply of Animus produced by the park's guests would be enough to keep the wizard's curse from draining her completely and killing her.

Operating on a contract with the Amagi Development firm, the park operates on the agreement that it makes an annual tally of 500,000 guests/ticket sales, which would be tallied on the first of each August. If the park fails to meet the agreed amount of guests/ticket sales five years in a row, the rights and ownership of the park will be transferred to the firm. Having failed to meet the required quota of guests four years in a row, the park had fallen into dire straits.

After trying several management consultants, all of which quit, a prophecy from an oracle instructs Latifah to instruct then-acting manager Isuzu Sento, who had been acting as manager in Latifah's stead for the past year to no avail, to hire the high school student Seiya Kanie as the park's new manager.
With the current visitor count at 250,000, and with only three months remaining to meet the quota, Seiya immediately implements a new purchase scheme by dramatically lowering the park's ticket prices to 30 yen, extending the park's open hours from 5pm to 7pm (with the intention of extending it further to 9pm once the proper lighting is installed) and launching a commercial video featuring the park's female staff in swimsuits. As well as spinning an amateur video of Moffle beating up an unruly guest to gain public attention and shutting the park from visitors for a day in order to clean and repair the facilities.

Following a near disastrous flooding of the park's underground facilities, Seiya sought a new source of income and discovered the Digerry Clan and the dragon Rubrum residing within a forgotten attraction within the park's southern property. Selling Dornell's anime/manga/video game collection to momentarily buoy the budget, Seiya hired the Digerry Clan and Rubrum as new staff while also beginning to ferment a plan using the southern section's abandoned sports stadium.