Aisu slightly resembles Seiya Kanie, in the sense that she has golden and brown hued eyes. Aisu's hair is dark brown where it is at least shoulder length that she has so far been seen tied up into a messy pony tail.

The first thing that the audience can deduct is that Aisu is not a morning person. However she is a friendly person who can quickly become familiar with people, which is seen in Episode 1 when she refers to Isuzu as "Isuzu-chan" despite her only have known her for a night.

She loves her nephew and wants him to be happy as seen when she saw in the company of Isuzu Sento. She was more than happy to see him with a girl as she was worried about social life which she kept from, probably to spare his feelings. This was seen as she became visibly distressed when it seems that Seiya Kanie heard her thoughts. Whilst she is in this distressed form, she panics and lists a few reasons for her apparent outburst, including: "Looks like I'm not completely sober yet" which suggests that she is fond of drinking and/or partying, even in the morning. Even if she may be a party animal, Aisu is a responsible guardian and remind Seiya to go to school even as she is panicking.

Seiya is Aisu's nephew. As Seiya's aunt and guardian, she deeply cares for him, however it's suggested that It's revealed in a soliloquy of hers that he used to consider himself an "enemy of women" which was a cause of concern for her.

Despite that she wants what's best for him, which was shown when she was excited he made an acquaintance out of Isuzu Sento, meaning she wishes for her nephew to be happy with someone. Aisu became even more excited when Seiya acted as manager for the park and was proud to see him losing some of his arrogant ways to become kinder person. Once he quit, she motivated him to return the park as it was somewhere that made him feel happy and he followed her advice and took back his place as manager.

Saki is the daughter of Aisu's brother, making her Aisu's niece. Saki was born from the second marriage of Aisu's brother and not much is known about their relationship as they haven't been seen together.

She is immediately on friendly terms with Isuzu and calls her "Isuzu-chan". Aisu approves Isuzu's friendship with her nephew as her presence has had a great influence on Seiya's social attitude and made him open up more. 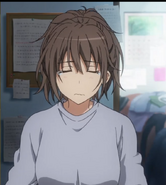